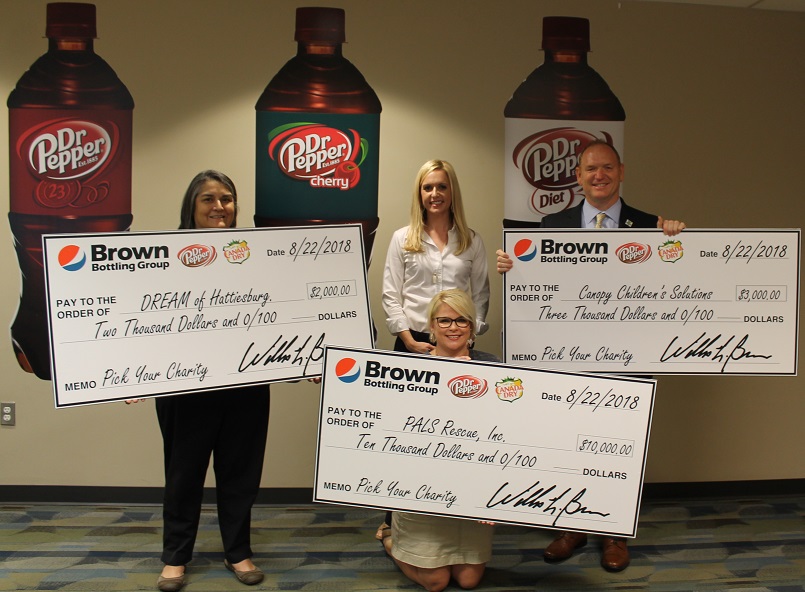 Between July 5 and August 8, one dollar from every case of Dr Pepper and Canada Dry take-home packaging purchased at select grocery locations in central Mississippi was collected to benefit the local charity finalists: DREAM of Hattiesburg, Canopy Children’s Solutions, and PALS Rescue. These charities encouraged their supporters to vote online during the same timeframe, and at the end of the voting period and nearly 87,000 total votes later, PALS Rescue, a no-kill animal shelter based in McComb, Miss., won first place and $10,000 followed by Canopy Children’s Solutions and DREAM of Hattiesburg, winning $3,000 and $2,000, respectively.

“These charities worked so hard this year to get out the vote to earn funding for their causes that they doubled the number of votes from last year’s competition,” said Shelley Brown Floyd, Executive Vice President at Brown Bottling Group.  “We’re delighted these funds from Pick Your Charity are able to directly impact three charities doing such admirable work in the Mississippi communities we serve.”

We got any @bangenergy fans?? Comment below your f

Soaking up this last bit of warmer weather 🌞 Th

This statement is just false. That's that. #v8 #